The North West Frontier in 54mm 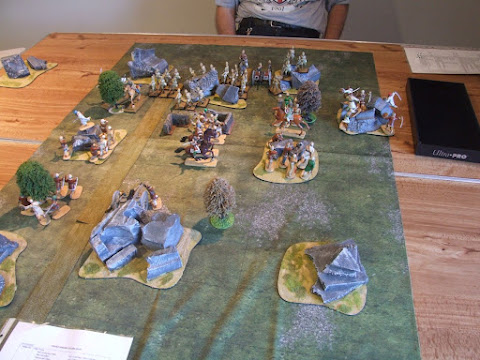 A NWF game in progress using the Portable Wargame
The North West Frontier has always appealed as a period ever since reading Donald Featherstone's Solo Wargaming book which has a number of atmospheric black and white photographs of NWF games in progress.

The collection started as a joint one between myself and my regular opponent Anthony Morton.  Anthony took the British (which he has a tendency to do!) and I collected the Pathan opposition.

We chose Armies in Plastic 54mm figures as they covered all the figures we needed, were fairly cheap and were in the 54mm scale we had decided the fight the period in.  The original idea was to use The Sword and the Flame rules. 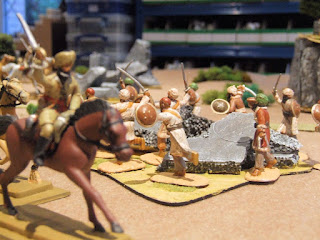 A Sword and the Flame game in progress 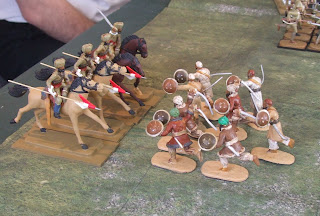 Anthony doesn't paint his own figures and I painted the British for him, using an undercoat of PVA, a mix of Coat D'arms paints and Coat D'arms Dark Brown Super shader to shade the figures which were then sealed with Matt Varnish.  The Pathans were painted in a similar way.

Anthony used the British army for the 2013 Little Wars Centenary games held at Sandhurst and added a general in a car as the leader.

We fought a number of games with The Sword and the Flame and then tried out the original Portable Wargame Colonial rules when I first became interested in grid based games and started experimenting with them. 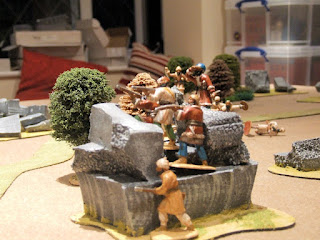 Since then we have also used The Men Who Would Be Kings from Osprey with 1/2 size units which works well on a 6' x 4' table and which give a balanced game.

The terrain was made from broken up polystyrene packacing stuck on irregular shaped MDF bases and then painted various shades of grey.  The rocks were arranged so that there are plenty of standing places for the figures to occupy.  The game mats are from an Irish company (who's name escapes me) who supplied mats made from the material use for sound deadening in cars and caravans.  It is a thick, robust material and I have 2 6' x 4' desert mats from them meaning I can make up an 8' x 6' table when I need to. 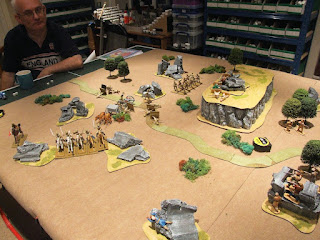 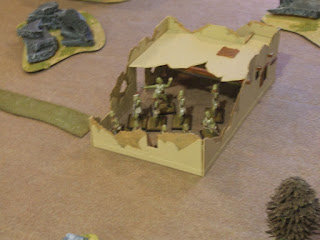 I have the Airfix Desert Outpost which serves as a small ruined fort and I also have the AIP Fort Kandahar building which I am part way through painting with textured paint and finishing off.  That should provide some good siege games.

Eventually Anthony decided he wanted to sell on the British (rather than duplicate his Little Legion 1879 army in 54mm) and so I bought them from him to keep the collection together and to make sure I had two opposing forces.

The current forces are:

As you can see, there is a disparity in the sizes of the two forces as I tended to paint more for Anthony than for myself as it was paid work!  I need to paint more cavalry (at least) to even the sides up and to balance the forces.

We very rarely use anywhere near the total number of British in a tabletop game but they are useful as forces for Funny Little Wars.